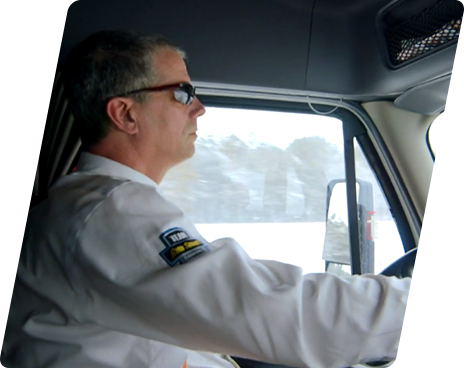 Henry Albert is, above all, a truck driver.  Owner of Albert Transport, Inc. based in Statesville, North Carolina, Henry’s driving and relentless pursuit is fuel mileage.  There’s not a day on the road Henry doesn’t dutifully record exactly how many miles his truck ran per gallon of fuel.  With daily variables such as weather, load, and terrain factored in, over time Henry has learned every secret to improving his fuel economy, and improving his own bottom line as a result.  Henry was named in 2007 “Trucker of the Year” by Overdrive Magazine, is part of the Team Run Smart Pro series sponsored by Freightliner, and may be the only truck driver in America who wears a tie to work every day. Henry is running with Fleet Engineers aerodynamic products on his truck because he sees results.

“I’ve noticed a dramatic reduction in road spray from it all,” says Albert, referring to the Fleet Engineers line of Aerodynamic Solutions. “In this industry, we have plenty of battles to fight. We’re dealing with government regulations, traffic, weather, drivers, brokers, shippers. When you’re battling with all those things, do we really want to pick a fight with the very air itself? They’ve (Fleet Engineers) made the perfect balance between usable every day and maximum benefit.”

Fleet Engineers recognized the critical value of listening to drivers like Henry, and so we’ve partnered with him and encouraged him to bring his suggestions and observations to our engineering team.  As a result, Fleet Engineers is joining forces with Henry what he calls, “The quest for 10.”  Fleet Engineers’ AeroSaver side skirts have saved Henry up to 7 miles per gallon, and our innovative AeroFlap mud flaps have added another 1 mpg.  As Henry says, these might be small incremental improvements, but when you add them all together they make a real difference.  Fleet Engineers is driving forward with owner/operators like Henry Albert.